Who is Adama Jallow?

Adama Jallow is a single mother and 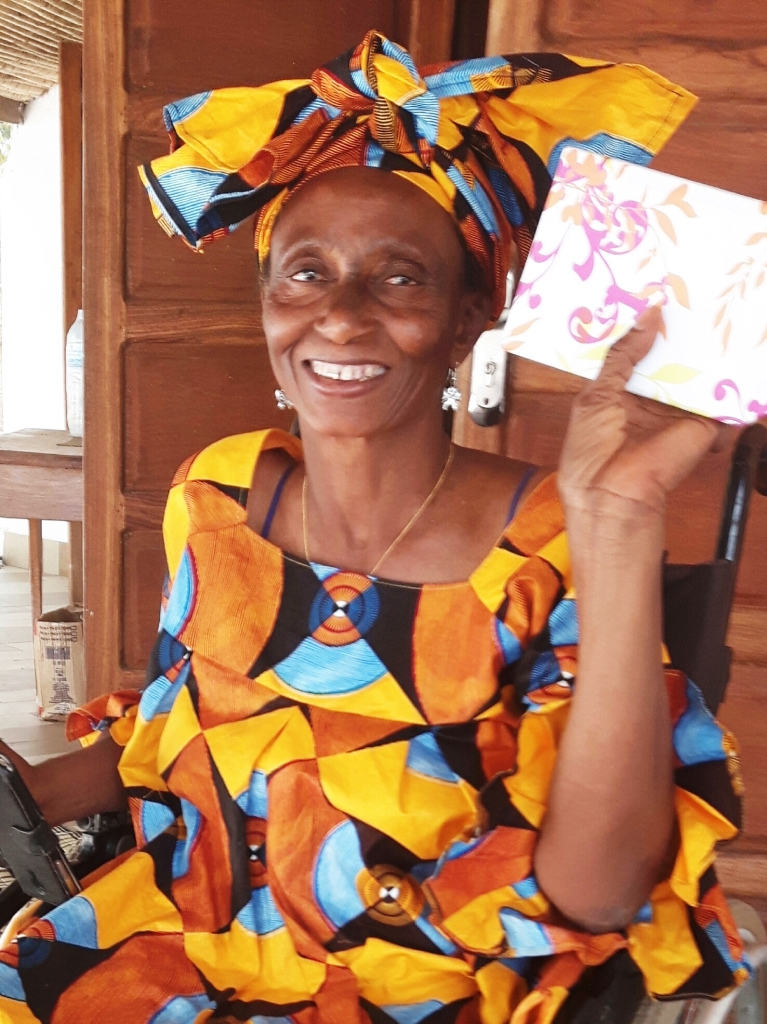 grandmother, living in the Gambia. When Adama was around 30 years old, she became disabled. Since then, she is in a wheelchair. She’s no longer able to walk and only has strength in one arm.
In the Gambia, being disabled means there’s no other option but to beg to provide for yourself and the one’s you are supporting. Being a mum, left by her husband and left with three children, one only being an infant at the time, this was no different for Adama.

The ever positive and resourceful woman she is, she found a way to get a better life for herself, while helping others.

Begging in the streets of Serrekunda, she wasn’t the only one. There’s people with disabilities to be found at every street corner in this busy market place, all with no other option but to beg for money to be able to feed themselves and to provide for their families. 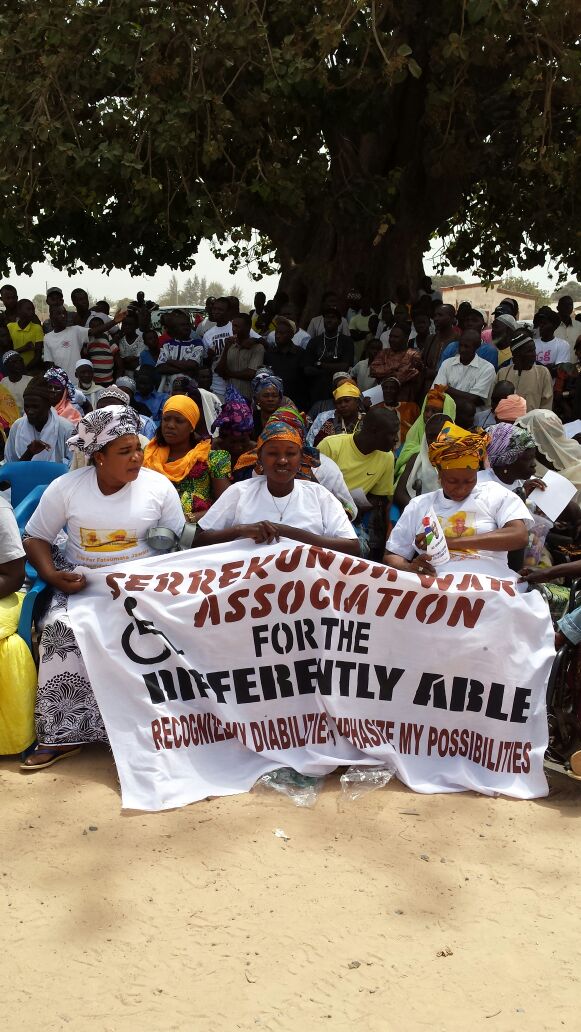 Being there for a while, Adama thought up a plan. She set up a meeting with all of the disabled people who were begging in the streets and made them a proposition. What if, from now on, they would collect and divide their revenues equally amongst each other at the end of every workday?
Because: wasn’t it the case that they all had to provide for their families; children, parents, brothers and sisters? By sharing, they would all have an income, every one of them, every single day.
The group agreed and this became the foundation for “the association of differently abled”, that they funded later on and still exisits today.

Adama moved her begging spot from Serrekunda to Senegambia, the tourist centre of the Gambia, where she begged in a corner of the Gamcel Office for Telecommunication. Here were tourists that sometimes helped her out and vice versa. Although not every day was as good as the other, in these  seven years, she managed to save some money and started a small business selling “scratch cards”: small cards containing phone credit for cell phones. She used to hang them from her wheel chair that a tourist had given her and started selling. From the revenues, if possible, she kept a part aside. This is how she managed to open up her small shop: “The Charity Shop”, where she sells scratchcards, cigarettes, sachets of coffee , bags of tea, sugar, milk, eggs etc. 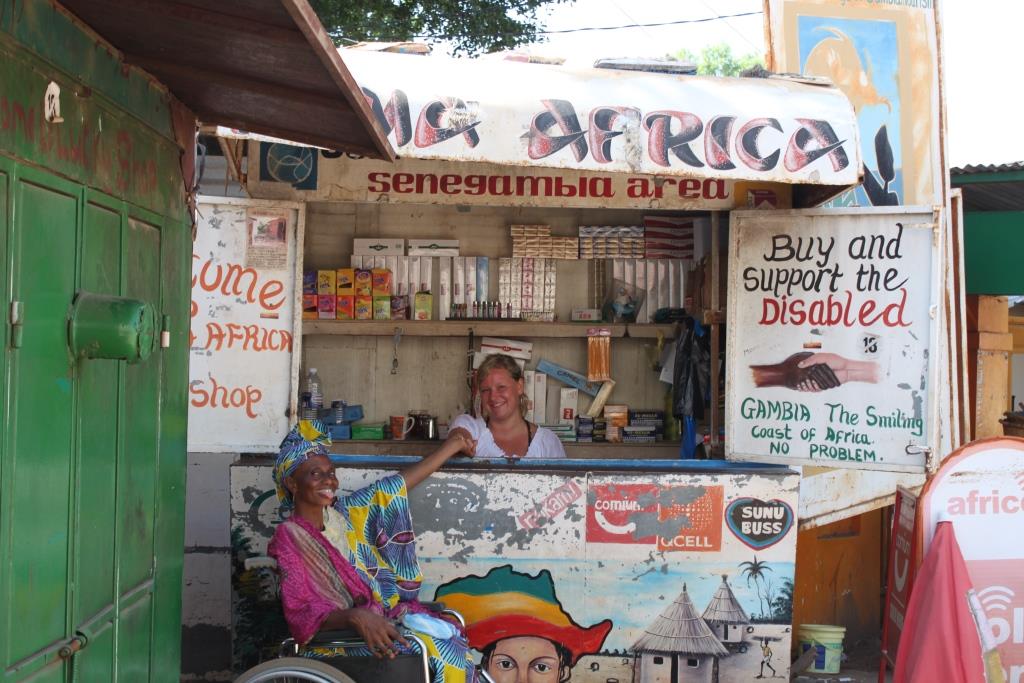 Adama never forgot where she came from. Since then, she has always helped other people to do what she did: set up a business for themselves and their families so they no longer had to beg. She’s helped countless young people. Took them in in her house, that she could now afford, and treated them as her own. This way, she has many more children than the three of her own.
There are still times where she doesn’t have enough to provide for everyone, but everybody who knows her, knows she will always share what she has. She has an enormous faith in the bigger picture: love, care and compassion, and she’s a very inspiring woman. She is honest and sincere. And despite being illiterate, she has fabulous organizational talents. Whenever you give her something, you’re sure it always will be well spent or used.

Bonnie interviewing Adama about living together in The Gambia

The Adama Jallow Foundation: how it started

Bonnie Vooijs, founder of the Adama Jallow Foundation and entrepeneur in The Netherlands, designed a house made of used care tires and had it built in The Gambia. For the biggest part of the project, Adama has helped her out by coordinating, hiring and directing the work people.

They became good friends and found out they had similar thoughts about a lot of things. They paid fair prices for good work and when the project was finished, they both missed the proud feeling that they had had while they were contributing to the Gambia by giving people employment, even it had been for a little while or a smaller project.

This is how the plan came up to rent the house out, with the option to help employ people.
The possibilities: add a cook, a cleaner, a taxi driver, a tailor, or even a beautician or massage therapist to your holiday and pay a fair price that will be paid to the professional entirely. 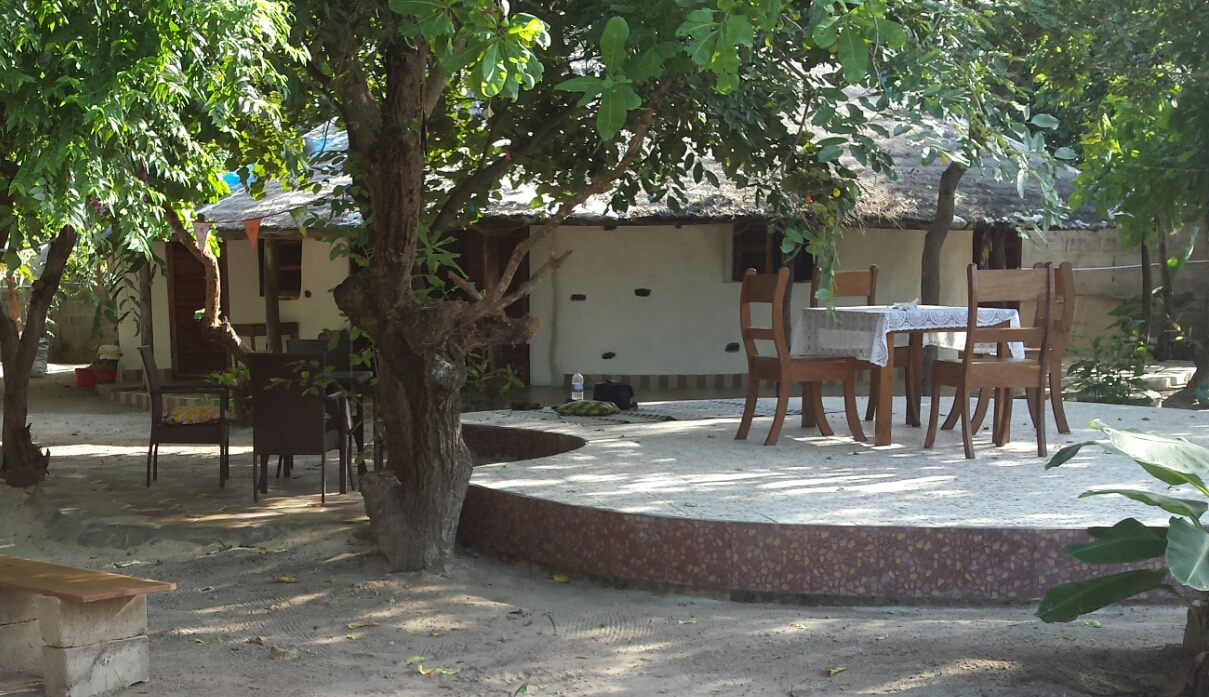 As a tourist, you’ll have an unforgettable holiday experience, no matter which options you’d like to add. Who can say they’ve stayed luxuriously in a spacious (eco!) house built of car tires in a beautiful country while you were contributing to Gambian society and nature? We’ll take care of everything for you.

Charities that deserve donations and your support:

In the many years Bonnie has spent time in the Gambia she met a few initiatives that, to her, have proven to be great people and a reliable charity:

The Association of “Differently Abled”: selfemployed people with disabilities:

As mentioned above: Adama Jallow’s plan was the foundation for this association of Differently Abled People when she herself had no other option but to beg to provide.

Their means are limited, so donations are welcome. Any money donated to this Gambian foundation (for Gambians by Gambians), will be shared fairly and equally by a working system that was set up by Gambians themselves. While at the same time it re-enforcens the emancipation of self-employed Gambians with disabilities.